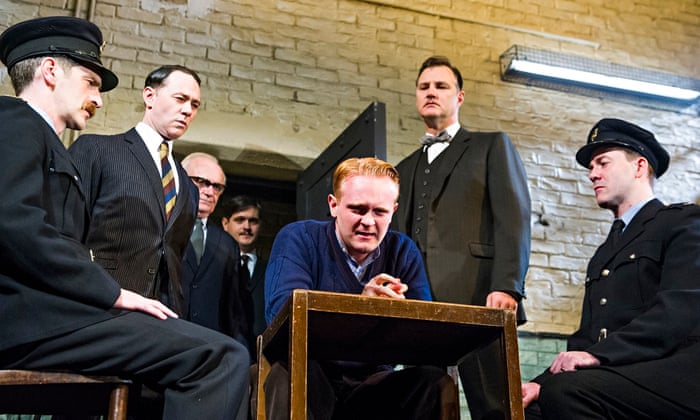 The Royal Court new season, autumn to winter 2015, kicks off with the first new play from writing royalty Martin McDonagh to premiere in the UK for over ten years. After success with last winter’s Liberian Girl, Matthew Dunster returns to the Court to direct.

With two Oliviers, an Oscar and a BAFTA to his name, Irish writer Martin McDonagh’s a master of creating captivating drama on stage and screen. Even if you haven’t heard the name, you’ll have seen one of his hits. He was behind blackly funny films In Bruges and Seven Psychopaths, and has impressed on both Broadway and the West End, most recently with The Cripple of Inishmaan starring Daniel Radcliffe.

This latest Martin McDonagh offering is like watching jazz: erratic, surprising and offbeat, the audience is powerless to predict what will come next while McDonagh manipulates the beat. Monologues are matched with pacy dialogue and under the direction of Matthew Dunster, no element of McDonagh’s dark and dry humour is left unexplored. The staging is also a revelation. Prison cells rise from the floor and diners appear from the ceiling.

Martin McDonagh’s renowned for bringing a combination of wit and profundity to the very darkest of subject matters (Pillowman, his Olivier-winning comedy at the National Theatre deals with the massacring of infants).

This Royal Court premiere is no different. As the title suggests, the hero, Harry, is an executioner who we meet on the day that capital punishment is abolished. Among locals curious to hear Harry’s reaction, there is a strange figure with more mysterious motivations for visiting.

David Morrissey as the second best hangman in Britain has amazing range – bouncing between a mad tyrant taking court in his run down pub to the naughty school boy being told off by his rival for stepping out of line. Reece Shearsmith as the vengeful ex colleague is also a magician with character – moving from snivelling sexual pervert to criminal mastermind and back; and Bronwyn James as ‘our Shirley’ deserves a mention for her fantastic comic timing and portrayal of the hormonal teenage daughter drawn in by an older man.

But the real star is Johnny Flynn – the melodious folk singer-songwriter – who whips up a storm as the menacing stranger Mooney. Sending the ensemble into disarray, the boy next door swings to mentally deranged with just a flick of blonde hair

As the play comes to a climax the farcical tone of the final ensemble piece is magnificently realised and the audience doesn’t know whether to cry with laughter or despair.

A savage satire on the justice system, Hangmen is a tour de force that shows McDonagh working at the peak of his capabilities with the audience hanging on his every word.