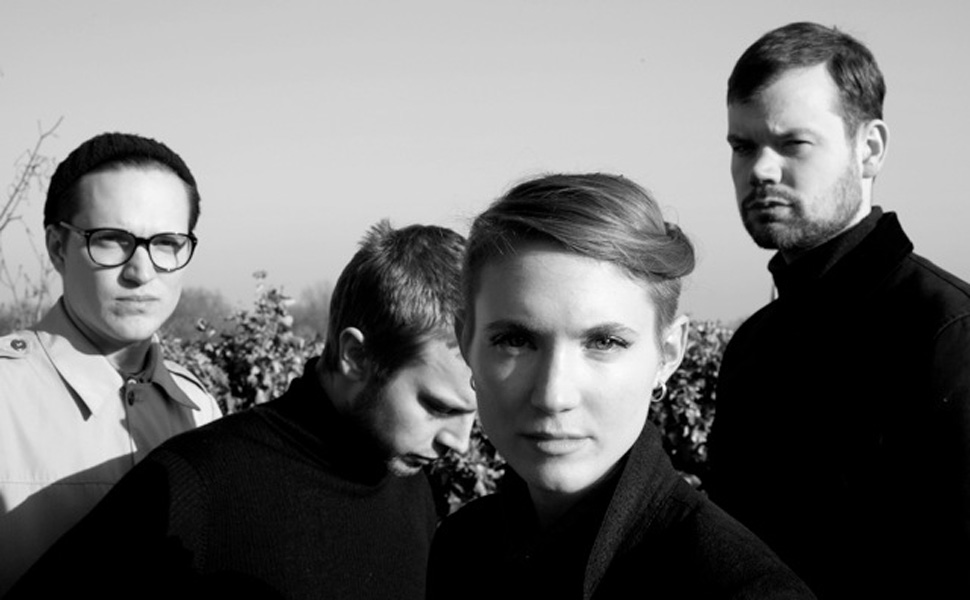 For British readers the idea of Woman’s Hour, the band, conjures up images of Sue MacGregor on synths and Jenni Murray harmonising with Riot Grrl vigour about home births and the gender pay gap. And as formidable as that image is I doubt the world is ready for it. Step forward Woman’s Hour the minimalist four-piece hailed as Northern England’s answer to The XX. The fact that they’re named after the stalwart BBC Radio 4 programme which has given British listeners ‘a female perspective on the world’ since 1946 is sheer accident; they’d always titled tracks after radio shows and when it came to their first live performance, Woman’s Hour made sense – and it stuck.

The band formed three years ago when siblings Will and Fiona Burgess moved from Kendal in the Lake District to London, joining up with former schoolmates Nicholas Graves and Josh Hunnisett. “Music has always been a part of my life,” says Burgess. “But being in London piqued our curiosity to really give it a try.” What began as a bit of escapist fun, soon evolved into something more serious – they were scouted and signed to indie label within two months. But after releasing two singles they found themselves frustrated by the direction they were headed. “What we realised is that it had happened too quickly,” she explains. “And we weren’t really ready for it or in control.”

After leaving the label in 2012 to regroup, they began collaborating with respected 4AD producer Tom Morris. Together, they took a hold of their creative output. “Morris really helped us to be confident about finding our sound,” explains Burgess. And listening to their most recent releases – , and – it’s clear they’ve found it. Burgess’s ethereal vocals are laid over slow-moving beats that recall the pristine pop of Portishead and LA styles of Warpaint – all with an indie dash of celebrated fellow Cumbrians, Wild Beasts.

Beyond their sparse sound, what marks out Woman’s Hour is their knack for creative collaboration. Taking inspiration from the immaculate artwork of Kraftwerk and The Beatles’ The White Album cover by artist Robert Rauschenberg, this is a group for whom visual identity is equal to sound. Most notable is their recent collaborations with <Deutsche Börse Photography> prize-winning artists Oliver Chanarin and Adam Broomberg. “It’s a dialogue that happens pretty naturally,” says Burgess of the creative process. “Their work is concerned with questioning and critiquing the role of photography.” Using stills and film Chanarin and Broomberg, who recently exhibited at MOMA, help visualise the Woman’s Hour’s sound. The imagery often comes from the past: eccentric Eighties self-help and self-defence manuals with titles from to .  Such re-appropriation – taking a historical picture out of context to give it a completely different meaning – is pertinent to both artists and band. “We share an interest in the politics of photography and its role in everyday life,” says Burgess. “Our music tends to touch on emotional vulnerability. So a self-defence manual for women is a visual manifestation of that.”

Woman’s Hour’s most recent video stars Vilma, a deaf actress who signs to the song, interpreting the music through a series of vibrations. Hers is a visceral, not a literal, translation. The concept came about after Fiona saw two people signing to one another on the street. Here, imagery and sound combine to create something akin to performance. “It’s a look at how language can become dance,” says Burgess, who has just completed a masters degree in Theatre and Performance studies. “It’s about the performance in everyday life and how to express the rhythm of feeling.”

It’s no surprise that the performance artist Laurie Anderson is one of Burgess’s cultural heroines. “I’ve always found her really inspiring,” she says. “ is such a great song – and a perfect example of how music and performance art can connect. She managed to blur the lines between music and art in a really unique and powerful way.” Patti Smith too is a model for the band’s pursuit of an identity beyond their music. “It’s so comforting to know how Smith survived as an artist in the Seventies,” she continues. “She didn’t just see herself as a musician, but as a poet, a painter and an artist.”

The band’s debut album is the perfect description of their carefully crafted creative process. As seamless as their sound has become – this is a group who aren’t afraid of the grind. “We went on a real journey to put this album together. There was a lot of labour involved,” Burgess admits. “Some of the tracks were completely reworked, taking on totally different guises before we were all happy. But you work on something because you love it. For me the creative process is always going to be a layering of ideas.”

Conversations is out now on Secretly Canadian

“As close to an LA summer as we’ll get.”

The War On Drugs –

“The boss is in charge of the summer.”

“For when the sun goes down.”